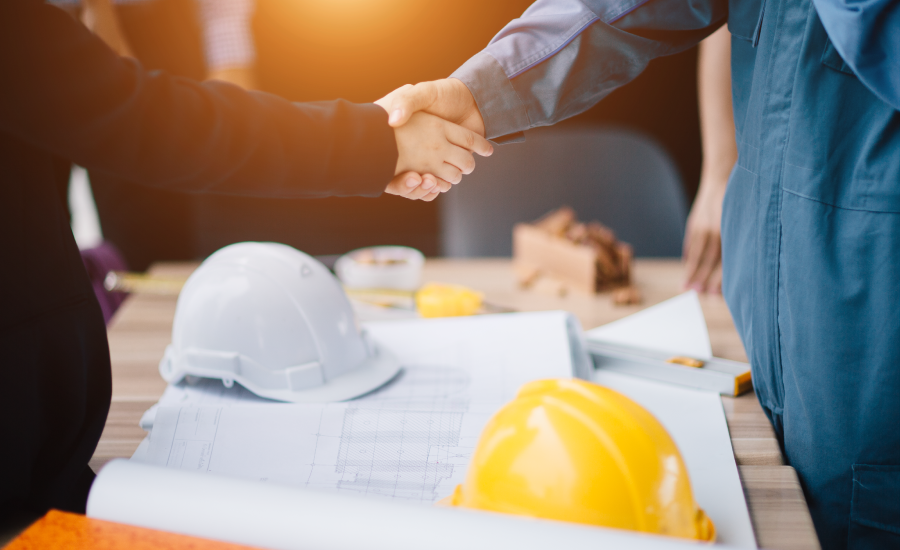 The European Federation of the Construction Industry forecasts a growth of 7% in the sector, during this year 2021. This is because of the economic recovery and the entry of the European funds. The employer’s association indicates that construction will need around 700,000 employees,  which may exceed the figure of two million employed. The president of the National Construction Confederation (CNC), Pedro Fernández Alén, says that work in the sector has increased more than double the average in Spain, although a competent workforce is needed. ... +info 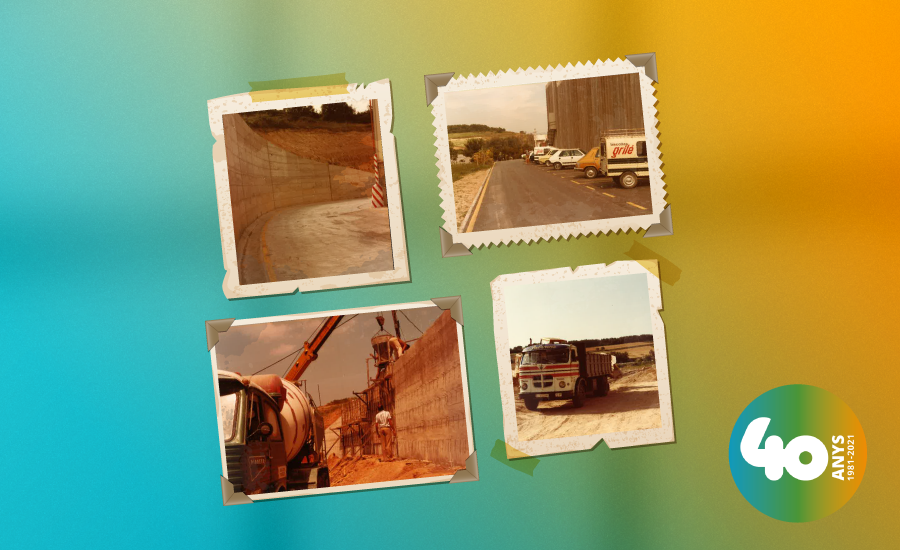 To celebrate Duinsa’s 40 years, we keep on sharing and remembering moments lived. On this occasion we share some old pictures, specifically from 1983, in a project for LU Biscuits, in Granollers. In that project we carried out different works within the plant, in the production area, and also in the exterior urbanization of their factory. In the pictures you can see our professionals working on the outside urbanization. ... +info 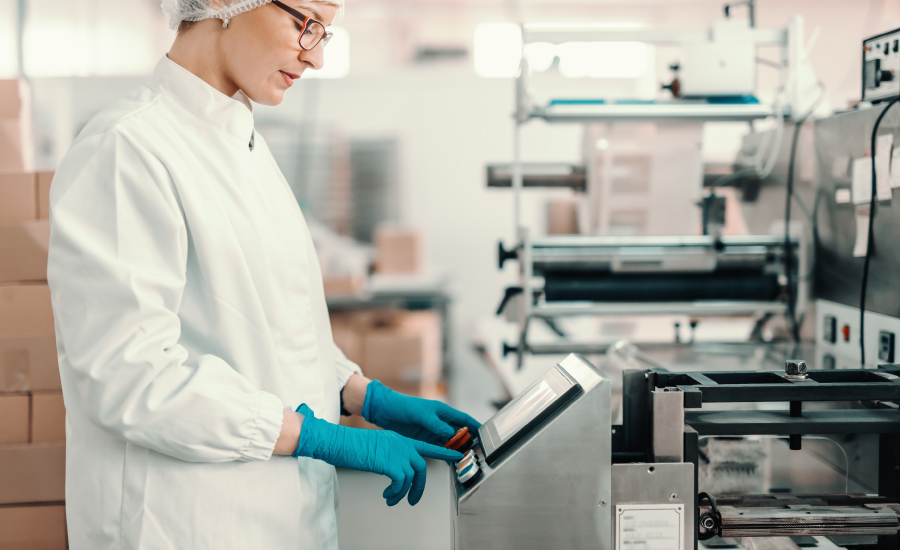 Companies in the food industry must comply with very demanding quality standards, both for handling conditions and when processing products. Requiring thorough hygiene and disinfection. In this type of environment, the control of air quality in the production areas is essential, mainly in terms of temperature, humidity and particle concentration, as pollutants are produced that can cause a negative environment impact, and above all they can harm the health of workers. In order to guarantee this good quality of the indoor air, and air filtration process is essential with a previous analysis of the ventilation systems and carrying out a study of the risks of pollution. After this study, the areas of possible risk and the need for purity of each space will be determined. When it comes to controlling the temperature, humidity and condensation of the installations, a good solution is to circulate the air with industrial HVLS ceiling fans. Always checking that the temperatures ar... +info 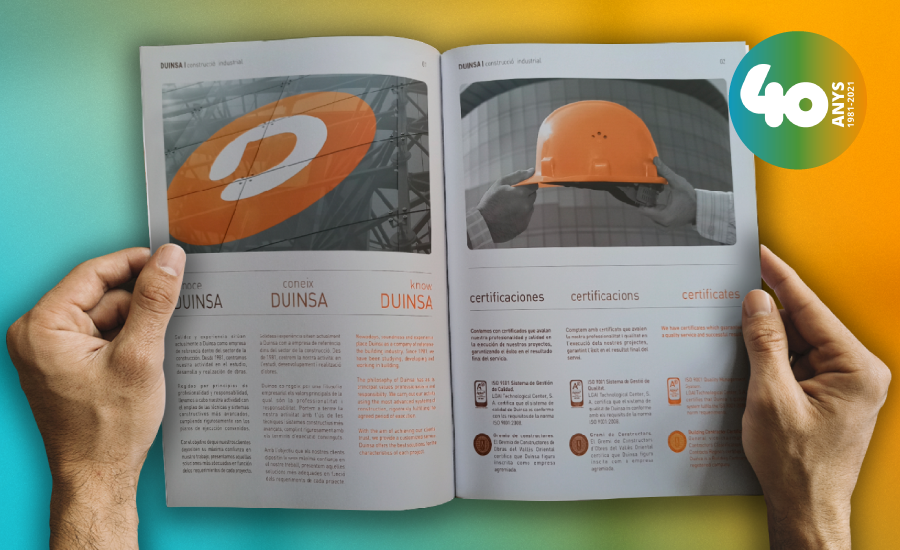 At DUINSA we are turning 40 and we want to celebrate it by remembering all those who have accompanied us during this trip. For this reason, we continue to share and remember moments lived in DUINSA, to thank the dedication and tenacity of our collaborators, and of all the people who have formed and are part of DUINSA. In this picture we show you one of our catalogs, specifically the one from 2011, when we celebrate 30 years. ... +info 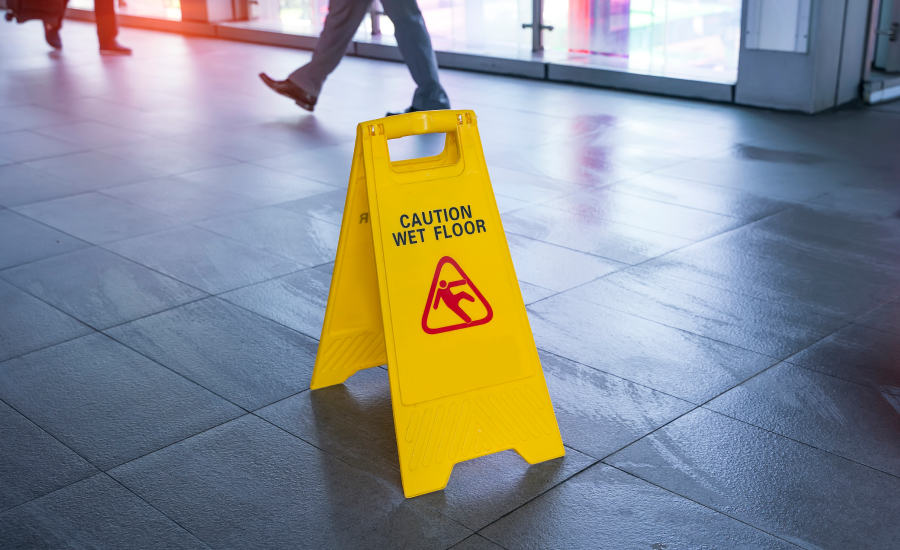 When summer arrives there are more wet surfaces, and a slippery surface is very dangerous, and can lead to more than one accident. The non-slip material is placed on the ground, or on a slippery surface, thus avoiding accidents and falls. Stairs are the potentially most dangerous area of buildings, mainly if they are made of wood or marble, as they are slippery materials. That is why using non-slip materials will benefit you, transforming the environment to be safe and avoiding possible injuries.         Ramps for cars or disabled people, due to their inclination degree, are another area where you have to be very careful with the material used. The safest option to prevent any accident is to use non-slip materials. Using non-slip material, we secure our surroundings, feeling all safer. What’s more, they are also simple treatments, which are applied quickly and cleanly, avoiding work and with a long durability. ... +info 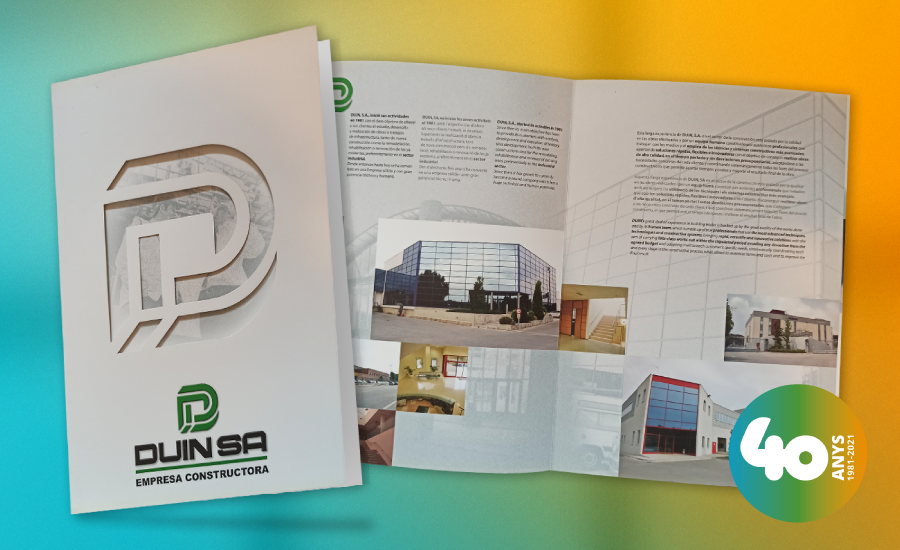 At DUINSA we are turning 40 and we want to celebrate it by remembering all those who have accompanied us during this trip. For this reason, we continue to share and remember moments lived in DUINSA, to thank the dedication and tenacity of our collaborators, and of all the people who have formed and are part of DUINSA. ... +info 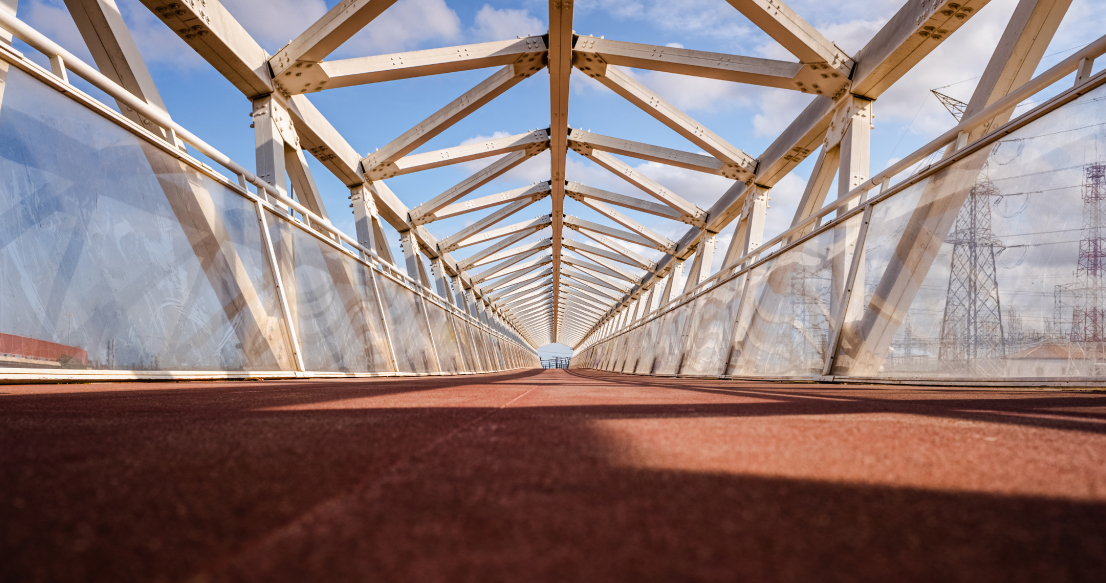 The triangle is the only polygon that does not deform when a force acts on it, which is why it is used regularly in construction. It is a simple structure formed by bars, which gains rigidity thanks to its shape. We can find them everywhere, on pylons, on cranes, in tents , on some bridges, on fairground rides and in some buildings. Based on triangulation, beams of considerable length and resistance have been achieved, called reticulated or braced beams, widely used in the construction of large buildings that require large flown areas and without pillars, achieving greater resistance than solid beams. Steel and Wood are the most used materials in the construction sector. Mainly steel is the one  that is used the most in Spain, due to its high resistance, low cost, speed of assembly and its ability to be reused. There are many famous structures that are made up of triangles joined together : The Eiffel Tower (Paris, France), 300 m high.The Millennium Wheel, the Londo... +info 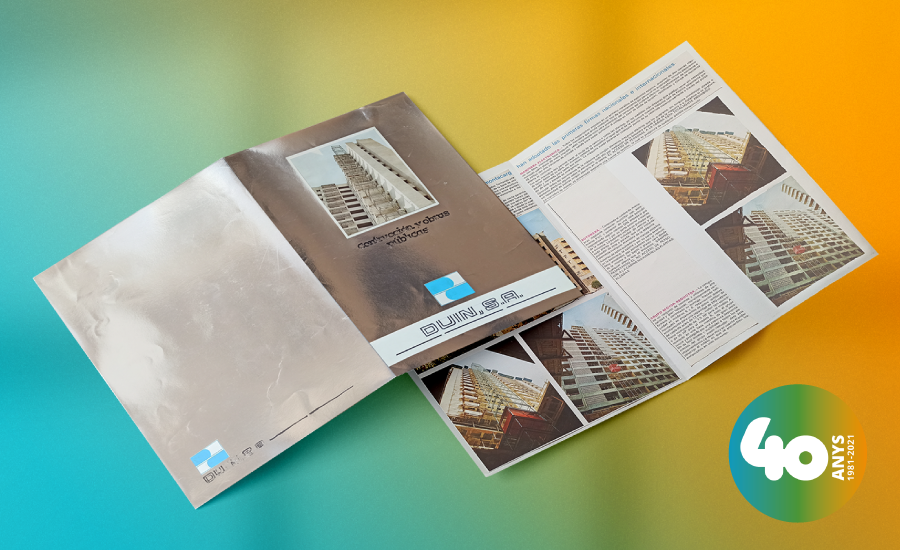 It’s our birthday and we want to celebrate it in a very special way. We are 40 years old and it is time to remember all those who have accompanied us during this journey. At DUINSA we celebrate that during these four decades we have worked and grown as a team, consolidating our ties, both with clients and suppliers, strengthening our values. That is why, during this year, we will share and remember several moments lived at DUINSA, to thank the dedication and tenacity of our collaborators, and of all the people who have been and are part of DUINSA. We start the next 40 years with the same enthusiasm, excitement and demand, to achieve the satisfaction of our clients. Thanks for making this possible! ... +info

The new call for the General Shareholders Meeting of the DUINSA company will be held next Monday, June 28, 2021 at 10 am, at the address C/Roger de Flor nº1, first, first in Granollers. For more information, see the attached document:Convocatoria_Junta_General-Accionistas_DUINSA_2020.pdf ... +info 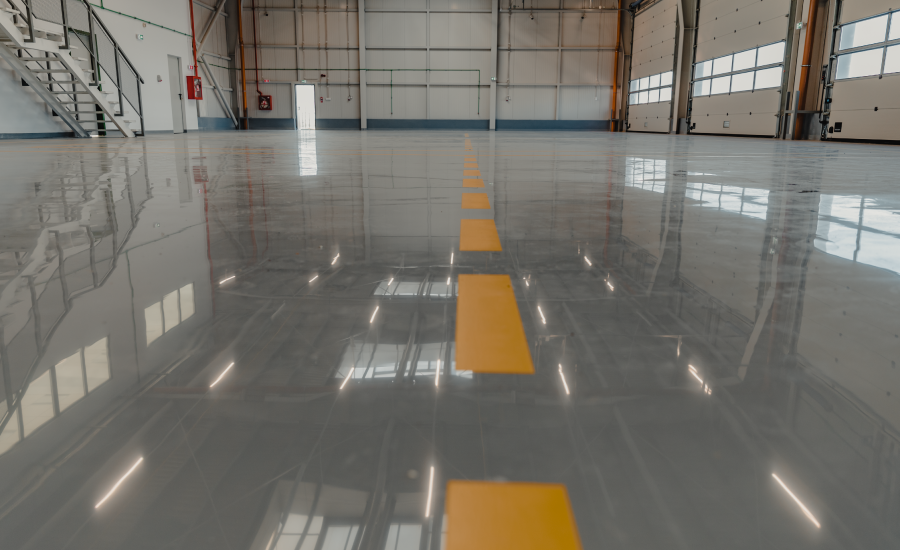 Continuous pavements are the best option for renovating an industrial area, due to their high resistance and their finished aesthetics. They are floors of printed concrete with a finish that has no joints, so they are the most comprehensive option in the construction sector. Achieving a smooth and sometimes shiny surface. The use of continuous pavements in industrial spaces offers a series of benefits : They prevent the presence of cracks due to load or pressure, as they don’t have expansion joints.They are easier to clean and cheap to maintain.They prevent the proliferation of germs.They have greater resistance to high temperatures.They are waterproof and non-slip floors.The application is very fast and clean. There are different types of continuous pavements on the market, such as Epoxy Resin Pavements, Polyurethane Resins, Microcement, Concrete or Polished Cement and Continuous MicroTerrazo. At Duinsa we take care of offering you the best option, according to your n... +info

We inform you that this website administered by DUIN S.A. uses its own and third-party cookies for technical, analytical and/or statistical purposes on the transit of the web, for preference or customization, to help us to improve your experience as a user in our web environment based on your preferences and advertising, to show you advertising related to your interests, creating behavior profiles by analyzing your browsing habits. To accept all cookies, click on “ACCEPT”. To get more information about these cookies, please see our "Cookies Policy"
You can SET UP the use of cookies on this website and if applicable, REJECT them.
ACCEPTREJECTCookie Settings
Privacy and Cookies Policy

Performance cookies are used to understand and analyze the key performance indexes of the website which helps in delivering a better user experience for the visitors.

Undefined cookies are those that are being analyzed and have not been classified into a category as yet.

Any cookies that may not be particularly necessary for the website to function and is used specifically to collect user personal data via analytics, ads, other embedded contents are termed as non-necessary cookies. It is mandatory to procure user consent prior to running these cookies on your website.

They are essential and strictly necessary cookies which allow you to browse our website and use the different options or services it has. For example, allow third-party multimedia playback, browsing fluidity, use security elements during browsing, recognition of logins, control acces to private areas, etc.

They are cookies that allow us to monitor and analyze the behavior of different users on our website through aggregated or statistical information, with the aim of making improvements to the service based on the analysis of data on use.